Suzie Kennedy as Marilyn Monroe is renowned as one of the world's most famous lookalikes. 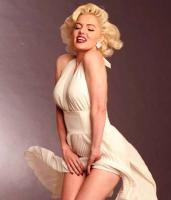 CELEBRITY LOOKALIKES based in Croydon

1 Performer based on Hire

Suzie Kennedy as Marilyn Monroe is renowned as one of the world's most famous lookalikes. Based in London, England but in demand worldwide and is recognised as a leader in her field and is regularly making personal appearances for all manor of companies. Suzie has starred in films, TV, commercials and on stage, portraying Marilyn Monroe at the highest level and in 2010 played the lead female in the Italian film "Io e Marilyn" (Me and Marilyn) which grossed millions in opening weekend, even beating Disney's new Christmas!