Steve has done every type of event you can imagine. From walking out of the Sea in St. Tropez, introducing Quantum Of Solace in Dubai, appearing in a TV sitcom abroad working with Sony, Heineken, Vodafone, O2, Aston Martin, Rolex, Omega and many more. 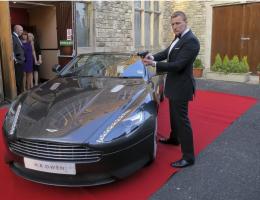 Daniel Craig Lookalike – Steve Wright is one of the most sought after JamesBond Lookalikes in the UK and around the world. Since he started in2007 he has been hired for many hundreds of events such as Meetand Greets, Corporate Parties, TV and Film, Trade Shows,Private Parties, Charity Events, Auctions and Hosting and film premiers.